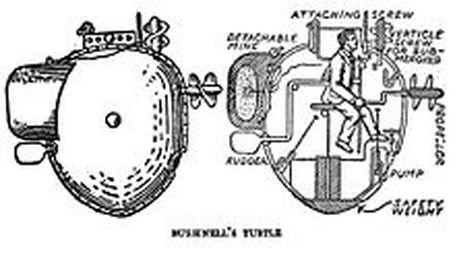 The year is 1824. The town is Warrenton, Georgia. Gentle Dr. Bush has just died at the age of 82. He's lived here for 30 years. He practiced medicine for the last 20 of those years. He also taught both religion and science at the local Warrenton Academy.

Dr. Bush was respected, but he was a very private man. We knew he was from New England and that he'd lived in France before he came here. That's about all we knew.

Now his executors are in for a surprise. First they find wooden pieces of a submarine prototype in Dr. Bush's workshop. His papers are even more startling. They find that Dr. Bush wasn't really Dr. Bush at all. He was Captain David Bushnell, once a member of the Continental Army's Corps of Engineers.

This gentle doctor was the first military submarine maker. Bushnell began as a bookish Connecticut farmer. When he was 29, his father died. So he sold the farm and went to Yale. For four years he studied science, and he built his man-powered sub to actually make an attack on an enemy warship.

He called his boat the Turtle because he'd made it from two hollowed-out wooden slabs. They looked like huge turtle shells. David Bushnell's brother Ezra learned to pilot the submarine.

The scheme: be towed into the vicinity of the target; open a foot-operated valve to let in enough water to sink, close the valve; move in under the enemy by cranking the two propellers – one for forward and one for vertical movement – turned by foot treadle "like a spinning wheel;" drill into the hull to attach a 150-pound keg of gunpowder with a clockwork detonator; crank to get away; operate a foot-pump to get the water out of the hull and thus re-surface.

David readied the Turtle for action against the English in 1776.

In early-morning darkness on September 7, 1776, "Turtle" made an attack on a British ship in New York harbor, probably HMS Eagle. He managed to get under the Eagle. But when he tried to anchor the torpedo, his drill hit an iron fitting or maybe an iron strap, it would not penetrate the hull.

(Contrary to most reports, the Eagle of 1776 had not been fitted with a copper-sheathed bottom.)

Lee did the best he could and by dawn he was exhausted. Lee became disoriented and soon bobbed to the surface where he was spotted by a lookout. He dumped his warhead in the bay and managed to get away. The charge went off harmlessly.

Still, the English fleet bolted and put to sea.

David readied the Turtle for action against the English in 1776. Then Ezra fell ill. David had to start from scratch.

He trained Ezra Lee, a gunnery sergeant, to sink the English man-o-war, Eagle. Lee did the best he could. He managed to get under the Eagle. But when he tried to anchor the torpedo, his drill hit an iron fitting. Dawn found Lee exhausted. He dumped his warhead in the bay and ran. The charge went off harmlessly. Still, the English fleet bolted. It put to sea.

But that didn't satisfy David Bushnell. He turned his fury and frustration on Lee. Lee fled back to his outfit, and Bushnell tried to smuggle the Turtle away from the British on a sloop. An English frigate spotted the sloop and sank it. So our first submarine came to rest at the bottom of the sea.

Bushnell had used up his fortune by now. He finished the Revolution designing mines. Then he went to France to sell his submarine design. He also failed at that. By 1795, thoroughly disillusioned, Bushnell came back to America, to Georgia, as Dr. Bush. He gave the rest of his life over to teaching and healing.

It'd be another forty years before a submarine would sink a ship -- ninety years before wholesale slaughter would begin. Gentle Dr. Bush was never able to see the fruit of David Bushnell's bold, visionary experiment.